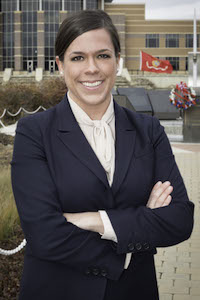 Jane E. Nagle is a licensed attorney with a concentration in the practice areas of divorce and family law as well as bankruptcy and debtors’ rights in DuPage, Cook, Will, Kane, Kendall, Lake and surrounding collar counties. Jane is compassionate towards her clients and aggressive in fighting for their cases.

Jane received her law degree from DePaul University College of Law in 2012 where she earned a CALI Excellence for the Future Award. She also graduated from Indiana University – Bloomington in 2006 with her Bachelor of Arts in both International Studies and Spanish with a minor in Italian. During law school, Jane worked as an extern for the Honorable Judge Michael Panter in both the Domestic Relations and Law Divisions. Jane was a member of and associate editor for the DePaul Law Review in which she had an article published in 2012.

Since graduation from law school, Jane has handled numerous pre-decree and post-decree divorce cases as well as paternity, child support enforcement, and contested cases involving the allocation of parental decision-making and parenting time. Jane is also experienced in handling chapter 7 bankruptcy cases as well as negotiating various types of unsecured debts obtaining excellent settlements for her clients. Jane has experience in appellate work, having contributed to two appellate briefs that resulted in favorable rulings. Jane is also a trained Guardian ad Litem with the Eighteenth Judicial Circuit Court where she investigates and provides reports to judges on issues related to the best interests of the children involved in contested divorce or parentage cases.

Jane currently serves on the Standing Committee on the Illinois Bar Journal Editorial Board and she is an active member of the DuPage County, Cook County, Will County Bar Association and Illinois State Bar Associations.

Standing Committee on the Illinois Bar Journal Editorial Board

Supreme Court Rule 304(a):  Does including the language of the rule in an order make it appealable? ISBA Family Law Newsletter, February 2015, vol. 58, no. 8.

The Marital Settlement Agreement is Signed and the Prove Up Hearing Scheduled, What Could Go Wrong? DCBA Brief, 2014

CALI Excellence for the Future Award, 2010

Contact Us
Practice Areas
Client Reviews
★★★★★
"Dan's expert handling of my divorce case was beyond my expectations. He takes control, documents your facts and summarizes options for you throughout the process. You will always get a timely response by email or phone. He will not forget the facts in your case or be uprepared for milestones along the way. He will advise on important matters but act per your direction. Finally, he will maintain a positive and professional communication with all parties involved." Jacquelyn
★★★★★
"Lisa has been my lawyer for the past 4 years for various court precedings and has been awesome. She always knew what was going on with my case and always took the time to ask what I wanted the end result to be. She’s tough and not scared to speak her mind in a courtroom in order to fight for her client. Lisa also always worked with me financially in order to work around what I could afford. I would 10/10 recommend her to anyone and would hire her again if needed." Cali
★★★★★
"Ms. Defino did an absolutely amazing job working with me on my case. She was very, very prepared, was excellent in responding to calls, emails and messages, understood the law and worked with with partners of her firm if there were areas that we needed advice and other opinions on. Jessica was a very comfortable to work with, super personal and got all of my needs and wants out of my divorce case. I would highly recommend working with Ms. Defino." Matt
★★★★★
"I was represented better than I could have ever imagined. My needs were put first and was treated as a friend rather than a number. My opinions were valued and my doubts were always reassured. My nerves were calmed and the process was always explained. Jane Nagle fought hard for me. she went above and beyond and did everything she could to ensure a great outcome. I couldn't have asked for a better attorney and her firm. Thank you from the bottom of my heart." Marcia
View More
Submit a Law Firm Client Review