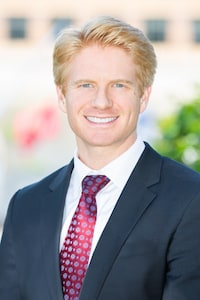 Richard Ian Conner graduated from Western Illinois University in 2010, where he earned a Bachelor in Arts in Political Science with a Minor in Business. He obtained his law degree from Southern Illinois University School of Law in 2014. While in law school, he put specific emphasis on assisting low-income and senior residents of central and southern Illinois through the not-for profit corporation Land of Lincoln Legal Assistance Foundation and the SIU Self-Help Legal Center.

Ian is licensed to practice law in the State of Illinois, and he has a strong desire to provide quality legal advocacy and support to all of his clients. Throughout his legal career, he has practiced predominantly in Cook County, DuPage County, Will County, Kane County, Lake County, and surrounding areas. Ian has significant knowledge and experience in property division, spousal support, child support, allocation of parental responsibility (formerly known as child custody), allocation of parenting time (formerly known as visitation) domestic violence, trial advocacy, and appellate advocacy. With an emphasis on moral and ethical principles, Ian guides clients through all stages of their legal proceedings, while focusing on resolution tailored to the individuals involved and the circumstances of their cases. Some of those cases have established new legal precedent in Illinois, including the following:

As a licensed attorney, prior to joining Kollias P.C., Ian worked for two Chicago based Family Law Firms, where he gained extensive knowledge and experience dealing with both high-income and low-income clients.

Ian also worked with the Office of the Public Guardian, where he practiced pursuant to Illinois Supreme Court Rule 711 and worked alongside Child Representatives to advocate for the best interests of children in cases involving issues of custody, visitation, support, relocation, and risk of harm in orders of protection hearings.

Work History
Contact Us
Practice Areas
Client Reviews
★★★★★
"Dan's expert handling of my divorce case was beyond my expectations. He takes control, documents your facts and summarizes options for you throughout the process. You will always get a timely response by email or phone. He will not forget the facts in your case or be uprepared for milestones along the way. He will advise on important matters but act per your direction. Finally, he will maintain a positive and professional communication with all parties involved." Jacquelyn
★★★★★
"Dan and his staff were very professional. They communicated to me in a timely manner. I felt very comfortable working with Dan. I would recommend Dan and his office to any one." C.E.
★★★★★
"Ms. Defino did an absolutely amazing job working with me on my case. She was very, very prepared, was excellent in responding to calls, emails and messages, understood the law and worked with with partners of her firm if there were areas that we needed advice and other opinions on. Jessica was a very comfortable to work with, super personal and got all of my needs and wants out of my divorce case. I would highly recommend working with Ms. Defino." T.J.
★★★★★
"I was referred to Dan Kollias for my divorce case by other family members who had used his services in the past. Dan worked very hard on what turned out to be a complicated case and was professional and helpful throughout. He kept me informed of status and changes and met with me whenever a face-to-face meeting was requested or needed. I highly recommend Dan to others who need professional legal assistance." J.W.
View More
Submit a Law Firm Client Review